HEADLINERS
Tony Lindsay's Soul Soldiers
As the lead vocalist for Santana for 25 years, and also the leader of the popular San Francisco Bay Area R&B, Jazz , dance group Spangalang, and The Soul Soldiers, Internationally known Tony Lindsay has garnered 11 Grammy awards, travelled on several world tours and recorded on several of Santana's CD's. Along with performing and recording with several other Grammy Award Winners, Tony has recorded 4 solo CD's of his own. Different Moods, The Message is Love, self-titled" Tony Lindsay", and Memoirs.
Purchase Tickets
Roy Rogers & The Delta Rhythm Kings
“This is the album of a lifetime, the distillation of everything that has made Roy Rogers such an important blues artist over the years. The slide work is superb and the band rocks with white hot intensity. A masterpiece.” - John Swenson, Author, Rolling Stone, Elmore, Stereophile
Purchase Tickets
Jason Ricci & the Bad Kind
Jason Ricci is one of the most popular harmonica players on the planet today. Listed in almost every top ten list of players on the internet today Jason Ricci is a polarizing force always in the spot light and on the tips of critics, artists and fans tongue's everywhere.
Purchase Tickets 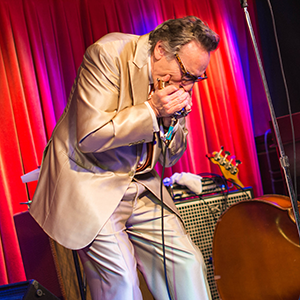 Rick Estrin & the Nightcats
Wildly fun, musically fearless and bursting with bravado, Rick Estrin & The Nightcats have created one of the blues’ most instantly recognizable sounds and no-holds-barred styles.
Purchase Tickets
Melody Angel
Young singer-guitarist Melody Angel cites artists as diverse as Prince, Slash, Michael Jackson, and Jimi Hendrix as role models, but her style is already distinctively personal—unlike her flashy predecessors, she conveys powerful emotion through subtlety and nuance rather than pyrotechnics.
Purchase Tickets
Cafe R&B
"Imagine Etta James riding a Harley out of an active volcano, and you'll have some vague inkling as to the vocal power emanating from 'Roach', the front woman of L.A. blues and groove unit Cafe R&B. But don't take our word for it; the group has earned raves from the likes of Ike Turner and Buddy Guy, who've seen a few blues acts in their day...
Purchase Tickets